skip to main | skip to sidebar

After much dilly-dallying, some shilly-shallying, a little to-and-froing and a not inconsiderable amount of footling about, the High Command of the Landgraviate of Mendelstadt has at last allowed onto the parade ground for its first public display the prime regiment of horse to grace our noble turf.

These are the Cuirassiers von Stolzhuf: a force as noble as the felicity of their inhaber's name suggests.

However, that young Colonel seems to me far too inexperienced for the role assigned to him. Is such a callow stripling a suitable leader for the premier regiment of the finest arm of the Landgraf's forces? He has less acquaintance with the battlefield than the Canon of Pachebel, and is most like to confuse the rattle of muskets with the reminders of his too-recently abandoned cradle.

However, as you might readily surmise, he is a clear favourite of the Landgraf, for reasons I have yet been unable to fathom. His grandfather is one of the richest men in Mendelstadt, that much is certain, but the lad's whiskerless and ladylike chin may also hold a clue. I hope he keeps his wits about him.

And who knows, perhaps when put to the test, his young mettle may prove to be steel and not merely the gold leaf he promises. 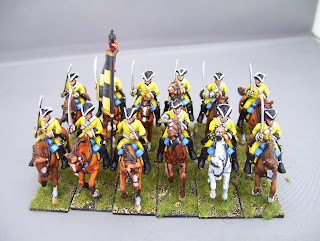 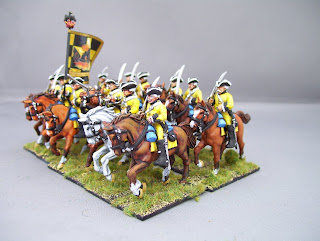 You will notice, perhaps, that the regiment's attire is not quite as consistent as the word "uniform" might ideally suggest. I detect in particular several singularities of headgear. This, I am told, is entirely due to the haste with which the regiment has been equipped, but I suspect the pocket of our young inhaber has been stretched in kitting out his troopers. Undoubtedly Grandpapa will be chewing his pipe when he tots up the accounts of his favourite grandson. Keeping a gentleman prominent beneath the Landgraf's eye proves no cheap pastime.

I note also an affectation this young man seems to have instituted. Whether it is a fad of Paris or St Petersburg, I couldn't say, but not only are these fierce gentlemen the bearers of powdered queues, their moustachios seem unusually to bear the same enhancement. Perhaps it will catch on. But in my judgement, the placement of this pale snuff on the philtrum of a galloping trooper must surely invite the mischance of inopportune sneezing. I suggest it is a fad that will soon fade.

I am sorry to relate that, within the sketches the Leibstandarte is hard to discern. Be assured that the draftsman has been reprimanded and his brushes relocated. I myself have essayed a separate sketch for your delectation. I hope you can forgive my rude and untutored skills.

It bears as a central motif the rising phoenix of Mendelstadt and the Landgraviate's proud motto "Resurgere per ignem", which I render "to rise again through fire", a reference I believe to Mendelstadt's long history of throwing off the yoke of oppressive neighbours.

The yellow field of the chequer is taken from the phoenix-flame: for the infantry of Mendelstadt, flame provides the facings to the coat of sky-blue that welcomes the rising phoenix, but for the cavalry, flame provides the several colours of the coats themselves, faced as they are with the black of the phoenix feather. (I except the hussars in this, for, as you will see, their colouring proves as fanciful and abberant as the rest of their dandified dress. For myself, I have no truck with the foppishness of the lighter horsemen).

As for the chequering of the Leibstandarte pattern: lacking any firm statement in regimental tradition, we must rely on the musings of the folk for a explanation that might, just, bear crediting (the folk of Mendelstadt like the common peoples of most realms have much to say on any subject, but little worth the hearing). Some say it represents the regiment's chequered career, having met many checks upon the battlefield. Others say that it conveys the precision of their drill, as exact and pressing as a precisely executed game of chess.

For myself, I prefer the more uplifting suggestion that it represents the fundamental duality of the dedicated soldier: his dark and deadly duty on the one hand a necessary but unfortunate measure to preserve and maintain, on the opposite hand, the balanced light of peace and tranquility that belongs to an untrammelled nation. Only through force of arms will Mendelstadt achieve the glorious peace that it is manifestly destined to achieve.
Posted by Major Wittering at 13:22

I like the look of both the regiment and their flag.

Let us see more of your units, please.

Very striking! I love the unit and the standard. Excellent writeup, too, as usual.

A fine regiment, even if somewhat dandyish in the Landgraf's eyes. The straw yellow coats are an extremely good idea.

A very good looking unit, not lacking of ... panache.
And considering how the Cuirassiers von Stolzhuf were... recruited, well, envious compliments for your talent and achievement! And an enjoyable writer to boot...

A splendid regiment and a thoughtful history. Success to their arms!

What a nice looking regiment; the guidon is really good.

I assume they are wearing the cuirass under their coats ?

I agree, a visually stunning regiment and standard. Well done on both! Now, the question beg -- What's next on the agenda?

Yes - cuirrasses under the coats. Much easier to paint that way - though the black contrast would've been attractive.

Currently I'm completing the first infantry regiment (all Minden minis), and converting the jagers for the "neutral" country of Harmatia. The Protecress of Pelarcona has chosen Front Rank Austrians as the basis of her troops, so these will be underway shortly, too.

Major Wittering in the undress uniform of the Mendelstadt Fusiliers 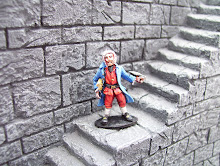